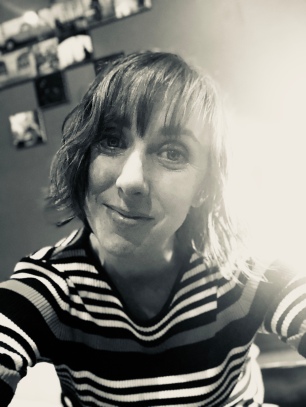 Sam Hawke is a fantasy writer who grew up and still lives in Canberra, Australia, where she and her husband are currently raising two small ninjas and two idiot dogs.

Here you can find out more about her, including links to interviews and appearances.

When I was 6, I wrote novels. By which I mean I used to elaborately write out the chapter name of 20 individual chapters (“A nasty shock”; “What’s in the box?”; “Simon gets his comeuppance”*) and the first sentence of each, then staple them together, intending to fill in those pesky details later. This is the earliest example I can remember of two recurring themes of my life:

Thirty plus years later, I am, I guess, well on the way. I’m still lazy (that’s a journey, not a destination), and my first book, City Of Lies, came out in July 2018.  This blog is sometimes about writing, frequently about my love of all things SFF, and regrettably often my pointless rambles about whatever ad is bothering me on TV at the moment.

Ever noticed how authors often have this brilliant list of jobs they’ve worked or places they’ve lived in their bios? I am something of a failure in this regard, as my real-life bio is so boring my eyes are glazing over just thinking about writing it. This makes me feel like something of a fraud. How can I be a writer without having worked as a journalist taxi driver meat packer amateur sleuth?

Anyway, because an actual bio would be dull here I’m going to instead list a bunch of things I do or am or just made up and you can paint a mental picture of my life from that. What, haven’t you got an imagination? Geesh.

There. It’s no lion tamer glass blower peanut butter factory manager, but it’s as good a summary as I can manage.

* I almost certainly used words like ‘commeuppance’. I was drawing heavily on my most common reading material (Enid Blyton novels). Also, I was slightly obnoxious.

**Dog may not actually be brown.

***What, you’ve never thought about this? Hasn’t anyone ever said to you they know something like the back of their hand and then you wonder how well DO I know the back of my hand, and where did that expression even come from? No? Just me then. CRITICAL UPDATE: Lawrence Schoen informs me that he has legitimately done this research and people do in fact recognise their own hands, so my curiosity in this regard is officially sated.

I will be at Canberra’s SFF conference, Conflux, on the October long weekend, at least for some of the time, though I will have kids in tow so will be a bit sporadic. At this stage I will just be wandering about as I was a bit disorganised about volunteering for panels, and now I’m quite attracted to the idea of just observing and not being on anything formal.

I’ll be at GenreCon in Brisbane on 23-24 November, giving a Worldcon update about the state of international SFF

You can read more of my ramblings at various places on the internet.

I did my first ever Reddit AMA (ask me anything) on r/fantasy in June – you can read the whole thing here on Reddit or the Tor.com summary here

I sat down with Ben Galley for his Fantasy Writers Lounge youtube channel and had a blast – apologies for the Australian mumbling!

Dan Stubbings hosting me over on his blog

The lovely Lawrence Schoen hosted me on his Eating Authors blog, where I recount an excellent and memorable meal my then-BF-now-husband and I had in Thailand.

I did an interview with the Debutante Ball here, talking strange jobs and missing talents.

The wonderful review team at The Fantasy Inn, who are the actual best, had a chat to me and shared their Jovan meme

The Fantasy Hive have me up for an interview, in which you will learn about my sneaky side, take notes on how not to follow my terrible process, and then see me get eaten by a shark

Karen McCoy hosts me over at her site, where we talk murderous ducks

The lovely Sarah at The Illustrated Page has an interview up that covers the publication process, writing about mental illness, advice for first time authors, and mad honey!

A while back being interviewed by Elizabeth Fitzgerald ahead of Helsinki Worldcon. This interview contains a very important graph charting my consumption of beverages, so this is really critical stuff for you to know if you ever want to surprise me with anything that involves the offer of a beverage.

And with the ACT Writers’ Centre in relation to their excellent Hardcopy program. I think this might possibly be the rambliest interview I’ve ever done. Yay me!

What Sam’s been reading